In its weekly fund flow report today, MIDF said that was the 25th consecutive week of foreign net selling. 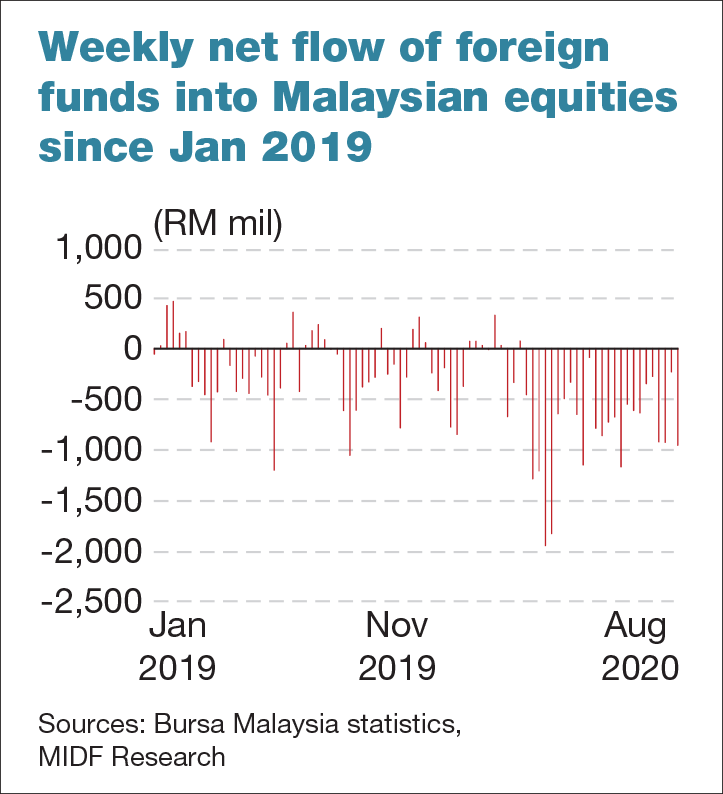 “In comparison with the other six Asian markets we track, Malaysia still has the fourth smallest foreign net outflow on a year-to-date basis,” it said.

MIDF said as the market reopened on Monday last week, foreign investors disposed of RM174.1 million net of local equities in spite of Malaysia’s Leading Index (LI) rebounding by 0.6% year-on-year (y-o-y) in May 2020 from -5.7% in the previous month.

The research house said that was also the highest recorded LI since March 2020 due to the reopening of economic activities after the movement control order (MCO) period.

“The foreign net outflow increased to RM250.9 million and RM336.9 million on Tuesday and Wednesday last week respectively with the largest net outflow of the week on Wednesday.

“The negative sentiment was probably due to fear of a new wave of Covid-19 infections globally and deterioration in the US-China relationship which might impede the recovery progress of the global economy as well as an uncertain domestic political scene,” it said.

MIDF said the foreign net outflow subsided last Thursday at a tune of RM90.3 million, probably buoyed by positive sentiment due to another potential US stimulus package, better-than-expected US non-farm payrolls for 1.76 million additional jobs in July 2020 and China’s higher exports (up 7.2% y-o-y) in the same month.

“On Friday, the foreign net outflow was the lowest at RM85.3 million, coinciding with Malaysia’s Industrial Production Index (IPI) which recorded a slower decline of 0.4% y-o-y in June 2020, mainly supported by a recovery in manufacturing output.

“In comparison with another three Southeast Asian markets that we tracked last week, Malaysia recorded the second highest foreign net outflow, while Thailand experienced the least,” it said.

MIDF said in terms of participation, retail investors recorded a weekly increase of 50.4% in average daily trading value (ADTV) to RM8.4 billion, while foreign investors experienced the least weekly increase in ADTV by 8.6% to reach RM1.7 billion, which was above the healthy level of RM1 billion.–The Edge

Anwar: Time to move on from race-based politics

By Chief Editor
2 days ago

By Chief Editor
2 days ago

Sultan of Selangor grants an audience to PM Anwar

By Chief Editor
3 days ago

Sultan of Selangor grants an audience to PM Anwar

Anwar tells Muhyiddin not to challenge him