KUALA LUMPUR (Aug 13): Top Glove Corp Bhd’s share price could reach RM77.60 in a bull scenario, according to Citi Research, as the group is poised to raise prices and capitalise on strong demand for gloves, given the group’s large manufacturing capacity.

In a note on Tuesday, the research house reiterated that Top Glove is “a clear winner” by virtue of it having the largest capacity, allowing the group to lead the pack in raising glove prices.

“Capacity-wise, the group also has the most near- to medium-term capacity coming to absorb pandemic-driven demand; our bull-case valuation of Top Glove is RM77.60,” said Citi, which has a target price (TP) of RM48.10 and “buy” rating for the glove manufacturer.

It said Top Glove’s inexpensive but effective products are benefiting from a surge in demand, putting it in a good position to absorb additional orders.

The demand-supply imbalance has enabled the group to aggressively raise its average selling prices (ASPs), which it said could drive “an unprecedented margin and earnings upcycle”.

On the other hand, the group’s share price could fall to RM16.50 in a bear scenario, with key risks including a sharper-than-expected decline in ASPs when Covid-19 de-escalates along with sharp volatility in raw material costs and the ringgit.

Oversupply is also a risk as industry players may decide to accelerate capacity roll-outs amid strong demand, followed by the entry of new players, said Citi. 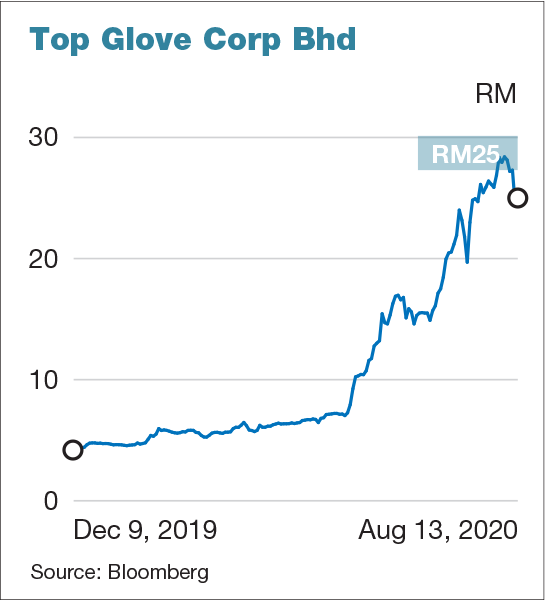 It said Hartalega is a relative laggard in terms of share prices and that the consensus is still underappreciating its revised ASP guidance.

For Kossan, while its share price has doubled since July, Citi still sees further upside due to the company’s guidance for aggressive July and August ASPs as well as further price hikes as the group moves closer towards market levels.

Kossan also has two new plants to be built in the near term, which will allow it to capitalise on strong demand.

“Being closer to end-markets via its seven distribution centres globally has and will continue to allow the group to capture the bulk of significant ASP increases at both the manufacturing and distribution levels, resulting in a faster and more aggressive ASP trend,” said the research house.

Ismail Sabri: Malaysia has to study viability of Russian vaccine before ordering